Answers About Medical Marijuana Use in Arizona

Arizona first legalized the use of marijuana through the 2010 Arizona Medical Marijuana Act or AMMA. The AMMA is operated by the Arizona Department of Health Services and strives to regulate the use of medical marijuana within the state. If you live in Arizona or simply have concerns about AMMA, we’ve worked to provide some of the answers to the most frequently asked questions.

Who in Arizona Can Possess Marijuana?

Only patients who are qualified to use marijuana and registered through the Arizona Department of Health Services or ADHS can possess this substance. To legally possess marijuana one must be able to verify their registration with an issued registry identification card.
Listed below are the qualifications for being registered through the ADHS:
-The patient must have seen a marijuana doctor licensed through the state. This doctor must be able to certify that the patient has a qualifying medical condition and then help them obtain their Arizona Medical Marijuana Registry ID Card through the ADHS.
-The list of medical conditions that make one eligible for marijuana possession include the following: Cancer, HIV/AIDS, glaucoma, Hepatitis C, Alzheimer’s Disease, Lou Gehrig’s Disease, Crohn’s Disease, or another condition that causes severe pain, intense nausea, wasting syndrome, seizures, or extreme muscle spasms. If these symptoms are brought on by treatment of a condition or disease, one is still illegible for marijuana possession.

How to Apply for a Marijuana Registry Identification Card

If a patient meets the requirements listed above, they can register for an identification card through a marijuana doctor. The doctor will walk patients through the steps necessary to obtain this ID.

How Much Does a Marijuana ID Cost?

Applying for the ID alone costs $150 per patient. In most cases, the Arizona marijuana doctor will charge between $100-$150 for their services which include a doctor appointment and certification. Generally speaking, an Arizona Medical Marijuana Registry ID Card should cost no more than $300 and will need to be renewed yearly.

Who Can Provide Patients with Medical Marijuana?

Medical marijuana is provided through not-for-profit entities. These organizations cultivate, sell, and often deliver the marijuana products to the patient or those providing care. To legally provide marijuana in Arizona, the dispensaries must have obtained a license through the ADHS and include a Medical Director who is an Arizona-licensed doctor on their staff.
Those working to provide marijuana must be employed or volunteer at a dispensary, be 21-years of age or older, have undergone a background check, and have no previous drug felonies. To be an Arizona dispensary budtender or agent, one must go through the ADHS and receive an agent card following fingerprinting and signing of certain certification which prohibits them from giving marijuana to those without the proper marijuana ID. Each dispensary agent must pay a $500 application fee.
If someone chooses not to be a dispensary agent but instead a designated caregiver, they must also go through a similar process. These caregivers are allowed to grow and dispense medical marijuana for as many as five patients who possess marijuana IDs. To apply for the position of a caregiver, one must be at least 21 year old, agree to help between one to five patients with their medical marijuana, go through a background check, and be free of drug felony convictions. The application fee to become a designated caregiver is $200.
If a patient would rather grow their own marijuana, this is acceptable. They also have the option to visit a dispensary and get the marijuana themselves.

How Much Marijuana Can a Patient Possess?

There are certain limits on how much and how frequently patients can purchase Phoenix and Scottsdale marijuana. Patients are only able to purchase marijuana once every two weeks, and are only allowed 2.5 ounces during that time period. For patients who choose to grow their own marijuana, there is a 12 plant limit.
If someone is a designated caregiver, they are only allowed to have 2.5 ounces usable medical marijuana per patient. If the caregiver grows their marijuana, there is a 12 plant per patient limit.

Where is Marijuana Use Illegal?

Can Someone on Medical Marijuana Get a DUI?

What Other Information Do I Need to Know?

If someone is drug tested by their employer while taking medical marijuana, they cannot be penalized unless they were acting against company policy by using, possessing, or acting under the influence of marijuana while on the job.
While medical marijuana has been legalized in Arizona, it is still considered an illegal substance by both the health insurance companies and the federal government’s laws. 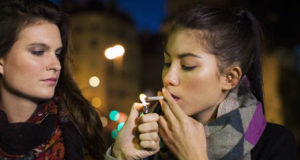 Marijuana Smoking and Weed’s Effects and Your Skin