Investors continue to purchase retail space and warehouses in states with cannabis-friendly laws.

The National Association of Realtors recently released a new study suggesting that cannabis investors are now purchasing more commercial property, especially warehouses, in US states where cannabis has been legal for recreational uses for the past 3 years. This growing trend if the reverse of what was seen in 2018. The study was based on a survey conducted in September 2019 of more than 600 commercial brokers from states where cannabis is legalized for recreational purposes and in other states where it’s legal medically.

Although there are federal laws banning the drug, there are many countries throughout the US where marijuana is legal in one way or another. Washington D.C., Alaska, Oregon, Washington, and Colorado have recreational-use policies that are long-standing. Seven other states just legalized marijuana for recreational within the last three years. In nearly half of the states, marijuana is legal for medical purposes. There are 17 states where it remains illegal.

The CEO of Green Acreage, a real estate trust focused on the Arizona cannabis delivery market, speaks about the importance of understanding supply and demand in relation to real estate demands in each state. For example, real estate is more valuable in places where there’s a higher barrier of entry to getting a license.

According to the previous year’s study, demand for warehouse space in states that only had laws for medical use outpaced the demand in those with recreational laws (34% and 27%). Bucking a trend set in 2018, cannabis investors are now purchasing commercial property within states that have allowed recreational cannabis for over 3 years. 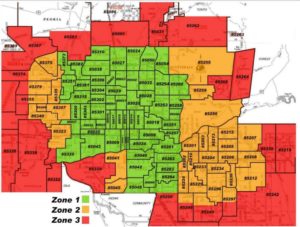 Dr. Jessica Lautz, from the National Association of Realtors, suspects that this increase in demand isn’t just for storage purposes. She thinks that many investors are purchasing this commercial property for growing as well.

The COO of Harborside, Jack Nichols, says that investors were aware that people would need extra space to manufacture and cultivate cannabis. Much of the unused space was purchased and/or rented by investors. According to Nichols, real estate prices have been inflated by cannabis investors that use up commercial space.

Cannabis businesses are being held back

Since cannabis businesses aren’t able to turn to banks for leasing and buying property, they have to turn to non-traditional means of accumulating capital. In order to get financing, companies usually use private real estate investment funds, venture capitalists, and even publicly-traded businesses.